There's always room for what YOU think.

People are so wrapped up in grasping the latest trend on shoes or newest phone that it seems that we are not valuing true treasures and the pearls of life. America is known for its great opportunities and constitutional rights. In our Declaration of Independence, it states that we are all given life, liberty, and the pursuit of happiness. However, people confuse those ideals with acquiring more and more than they need. America has become a materialistic society focusing more on superficial power. Our culture each day teaches us that we need materialistic possessions to be happy and achieve the ‘American Dream’. Although it feels amazing to get a new object, what happened to compassion? Relationships? Connections? What about love? America is finding value in superficial items and placing them as their priorities in life instead of in genuine values such as prioritizing family, friends, relationships, and life.
“Greed is a bottomless pit which exhausts the person in an endless effort to satisfy the need without ever reaching satisfaction.” - Erich Fromm

Immigrant children and the decline of self-worth
Why we should pay more attention to the silent side-effect of immigration
Samantha Rico - Editorial Contributor - Society
Wednesday, July 20th, 2016 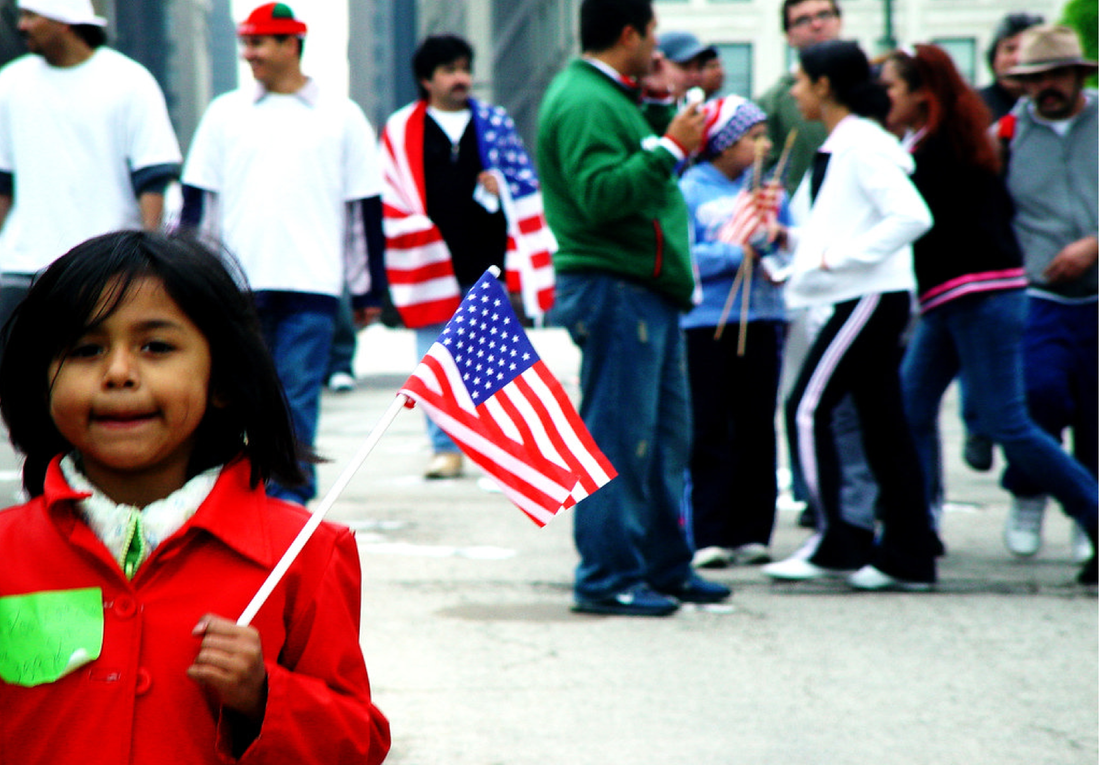 A child waves an American flag. Photo source: Flickr
SANTA ANA, CALIFORNIA --Los Angeles, California- Immigration is a very important issue in our society and there are many reasons why immigration can become a conflict. We often hear about immigration in terms of employment, crime, and politics. However, what people don’t really discuss are the hidden effects that the experience of immigrating to the United States can have on people. For instance, the self-esteem of an immigrant, the discrimination that occurs in our world, and the comparisons amongst each other are all elements that are important to discuss. The self-worth of an immigrant or any person in particular is a crucial part of their personality and character. This means that if an immigrant is going through low self-esteem, they can be able to increase their self-worth when they have accomplished achievements throughout their life whether it is in school, work, or other activities. When achievements are accomplished, goals are set. In other words, setting goals in life, and actually taking actions towards them, increases Mexican-Americans’ self-worth, according to the Social Work and Public. Immigrants suffer through low self-esteem, during their journey in America due to the judgement society gives them because of how they look or due to the fact that they are from a different culture, race, or ethnicity. Discrimination towards immigrants influences how they see themselves and comparisons with society start to evolve little by little, until it becomes a significant problem in our community.

In the article published in the journal, Social Work and Public Health, researchers conducted a study exploring how the involvement of immigrants is an important part of the development of their self-esteem. Immigrants have to be physically and mentally motivated in different involvements for their self-worth to increase, but not to the level where they feel superior than others. Furthermore, findings show different results for different types of immigrants (first or second generation) and whether they were children or adults during the point of immigration. While a second-generation immigrant is still a child, it is very difficult for their self-esteem to change in a positive or negative way. Although, as they start growing mentally, they begin to experience different moments in their lives. Challenges will help improve an immigrant's self-esteem because they are facing a significant event in their life when their competence is tested. As they go through their experiences, their mind begins to have a different perspective of how they view themselves to the better.

Parents are the first two important people in a child’s life that impacts their self-worth. Christopher J. Mruk, a professor of psychology who I interviewed, believes the self-worth of a child is defined at the age when they are still influenced by their parents. Mruk stated in the interview, “Thus, I would say that parents are very much involved in the development of self-esteem because they provide the first set of worthwhile values toward a child...” Parents should always provide helpful values towards their child, no matter the culture they come from.

Immigrant children are affected negatively from the discrimination that occurs towards them and we, as a society should be more aware of the impact that immigration has upon a child’s self-esteem. Through more positive self-esteem, a better society full of confident and capable people on their way to citizenship can be achieved.

Since our population is based off of immigrants, I believe that our society should be aware of the damage that we are all causing to immigrants, especially children, when we treat them differently like they are “illegal” or in other words, criminals. Children are the most affected in this dilemma of immigration and we all need to understand that the decrease of self-worth in a child impacts their aspirations and their future. As a community, we need to make immigrants, not only feel included, but be included in our society. It is important as humans to not show hate towards other people because it is dividing our world with hatred and discrimination. I think we all need to be united and not harm immigrant children, immigrants, or any other human being in our society.